Development of the I-BiT System 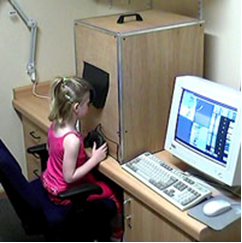 The original research prototype was constructed in-house and consisted of a desk top viewer linked to a PC. The PC had a standard monitor for the clinician and a stereo viewer for the patient. The child played the game using a joystick or watched video clips.

The basic concept of the I-BiT system is that the lazy, amblyopic eye is stimulated more than the good eye and when the child looks through the viewer at the game or video the lazy eye is encouraged to work.

Pilot studies were carried out at Nottingham and Glasgow and showed encouraging results.

The main findings from the studies were:

The published research paper can be found here detailing the results.

Through the last decade, virtual reality display systems have become lighter, smaller, faster and more easily delivered using off-the-shelf computer equipment. This led us to develop the I-BiT Plus system which uses shutter glasses instead of a desk-mounted viewer.

A grant from the NIHR (National Institute for Health Research) has allowed us to develop new software in the form of 6 new and improved games as well as software which blurs part of the image to the good eye whilst watching a DVD or programme.

We have also upgraded the hardware and the system is now much more streamlined, so as to be used more easily at home. We hope that, by delivering the treatment at home, we can achieve longer treatment times in a shorter timescale so as to maximise the effect.

The new system consists of:

The new games are:

The system will be loaned to patients to use at home for a set period of time and the results, alongside regular clinical assessments at the hospital, will be analysed.